That would be much appreciated

So, I've been working on and off on a conlang for a world of mine with 5 species of Keplerians. Keplerians are humanoids, and their main difference besides languages is their insides. But their mouth is basically the same as ours. So, I figured that any sound in the IPA will do, as long as I can pronounce it. Turns out, I can pronounce a lot of them, but not all. An example of what I can't pronounce is the Bilabial Trill. I just can't trill my B's like I can my R's. Here are my thoughts on the language: 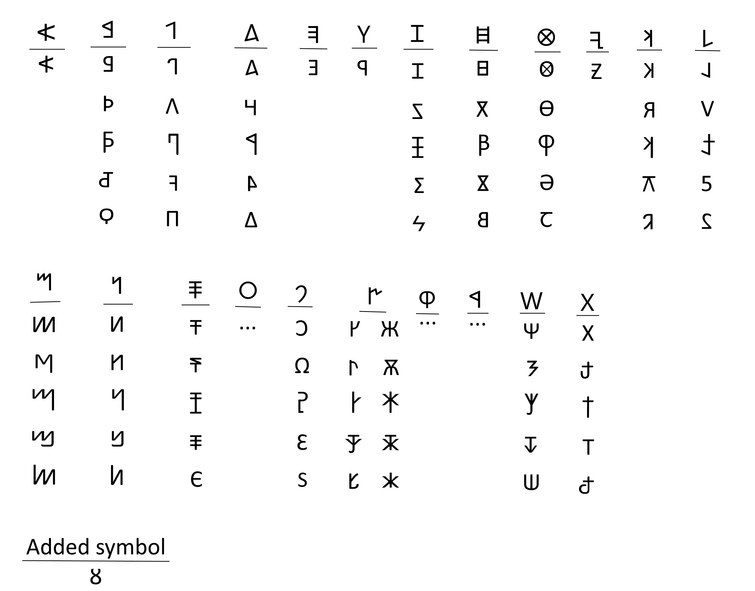 discord.gg/tqGeCn
(edited by A Fandom user)

I want to create an article on this page for Artifexian's conlang, Oa, named after the home planet of the Green Lantern Corps.

Is this sound change plausible?

ɴ > ɦ unconditionally, where ɴ only comes from a nasal before a uvular consonant.

I know ɴ is a rare sound and is diachronically unstable, and I am wondering if this is a plausible way to remove it.

So I’m starting on a language for my conworld. It is spoken by the trolls, who don’t have lips. Now I know this means they will not be able to use bilabial, labiodental or Linguolabial sounds. But I don’t know which vowels they would be able to produce, if anyone knows please just comment a list of vowels they can. Thank you

(edited by Could be somebody)

I was looking at a few languages that have Ts T and S in their phonology because I'm making a language that does the same. However, for word particles (what I call the shortest types of words, they form the bulk of the finer aspects of grammar) I want to have as large a phonology as possible so I can make as many one consonant sound words as I can that are different. However, I was thinking and I was wondering if Tsu, Tu, and Su, (mostly Tsu and Su) are too similar. In that same vein, if Ksu, and Psu, are as well, to Su and K/P (respectively), and to eachother. Also, the same with Pf, Tf, and Kf.

As for using voiced forms to increase my word count, in my language voiced is the informal version of the language, and voiceless is formal, but other than that they are completely the same. So Papa, father, is formal, while Baba, father, is informal.

With that said what are everyone's thoughts/expierences with using such Affricatives and the other sounds? The only languages I kind of speak that uses Tsu at all is Japanese and Chinese, but I don't speak them that well, however, Japanese is... special.

Thank you for any help in advance!

Do stack-based languages need to have a verbal period? I don't think they need that, but I'm just checking.

I would read the Fith page, but the "top" and "bottom" terminology is confusing to me.

What is a Swadesh Matrix Manager?

1. It's my name for a theoretical program that can dynamically add and sort lists of translations for multiple languages.

2. It's something I'm looking for.

So does anyone know of such an application?

So I've laid out most of the technical elements of my first conlang and am now looking towards a vocabulary. I want this to be an a priori vocabulary but inspiration from existing languages isn't out of the question. I already have a few words but I'm so far unable to find inspiration for new words. I have little knowledge of other languages and most of what I know about those I've tried learning has dried up. Could anyone give me some advice for making a fresh vocab for Boyem?

So yeah... I'm new to the Conlang community, and I'm introducing myself along with my new conlang (which is still definitely under construction). Bear in mind that most of my linguistics knowledge comes from practical linguistics (study of real languages) rather than the more theoretical linguistics that seems to dominate the conlang community, so my explanation of this new conlang may come off as crude. I'm just looking for guidance from real people as well as review.

I'll begin my journey into proliferating this conlang with a list of features currently in it:

I've been having a lot of trouble with the LangBox template. I know that there's some way to make the red boxes green. I've tried typing in "yes" or "no", but it doesn't work. Could anyone tell me how to do this? Thanks in advance.

(edited by The Cypress Station)

Hello everyone! I'm Nathan, and currently I'm creating my own language (like almost everyone here, I presume?). My question is: Can someone make a list of most necessary grammar rules in a language, because I really think I'll forget half the words

I created a language years ago, and more recently created about 4,500 words for it. I would like to upload a description, but I don't know how to do this. It's not a case of "create a language" because it is already complete; and it doesn't fit into the boxes. It has no noun/verb distinction, has no adjectives, adverbs or prepositions, has no nominative, accusative or ergative case, and so on. Any suggestions anyone?

I need some help, guys. I want to make a language for a fantasy story I'm working on but I've never made a conlang before. The language is going to be called Englic (Engleac?) and will be the language of the people of Suttenglea. I want the language to be like a fusion of English and German, both old and new. So far all I've got are some basic words like sutt for south. Any advice?

I'm not exactly sure if this is the correct board, but I'll post it here for now.

I have been developing my language, Řiküçreb, for a couple of years now. I have been its only speaker so far, and I would love to have some people learn it and help me modify it. If anyone would like to help and be a part of this, please let me know on this post or on my message board.

I understand sound change pretty well, but one thing simply confounds me: how on earth do paradigms develop the astounding level of irregularity they have? For example, how did the plural forms of Latin's personal endings develop? The plural of -ō/m is -mus, -s is -tis, and -t is -nt. What the heck? Did PIE use a separate plural morpheme for each person?

Elector Dark, I absoulutely love Misha's declension paradigm, but I'm at a loss as to how on earth such a thing could develop from an ancestor with a regularly-marked plural.

i am getting a tattoo. i am a thieves guild khajiit, so i want it inscribed in khajiit, "thieves guild forever" how can i translate this?