Ëkopion phonology is based on click consonants, basic and nasal vowels.

The glottal stop occurs between two vowels when there is no click connecting them. The glottal transition or fricative occurs mostly in loanwords.

Note that the physiology of Arthrowheels allows them to speak velar clicks in basic conversations, whereas it is judged impossible to articulate by humans.

The mid-central vowel occurs between two clicks and has a very weak, almost null release.

o and u can be unrounded in certain positions, such as after a dental consonant. 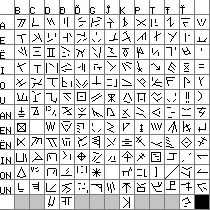 The standard Ëkopion romanization system is used to transcribe Ëkopion script into Human languages. Most clicks are converted to the corresponding stop by place of articulation. @ is considered a valid substitute for Ë.

From now on, the page will transcribe words using the standard Ëkopion romanization system.

The structure of a word is very variable if schwas are ignored as true vowels and glottal stops are not counted. The structure of a 4-sound word can be realized as CVCV, ʔVCV, CVCə or CəCV just to list a few. A word, however, cannot start with a pure vowel or end with a click without a schwa following it, although the letter is close to silent.

Loanwords can have an even larger variety of word structure, as some clusters like Ptl at the beginning of a word (such as in Ptlanet) are a rare occurrence. They usually follow the transcription method of English (or of the original language) names (see above).

Ëkopion is a highly inflected language. It used many affixes to generate various declensions and conjugations.

Verbs are conjugated according to tense, mood, person and number.

The infinitive of a verb is made by adding -ci to the root of the verb. There are no base words that end with the same suffix, as to avoid confusion.

The imperative mood is identical to the active future indicative, only with the postposition tag after the verb.

Ëkopion has seven noun cases: Nominative, Accusative, Ablative, Allative, Genitive, Locative and Dative. They follow an agglutinative declension pattern, that means the suffixes are simply attached to the end of the word.

The plural form of words is created by adding a suffix -dë before the case suffix. Exceptions are made when the word ends in a consonant, in which case the plural form ends in -ëde. If a word happens to end in -d or -t, the this suffix is removed and replaced with -dë. Note that n is not considered a separate consonant and acts as a nasalizer.

Ëkopion does not follow a strict word order, due to the fact that the accusative suffix is different from the nominative one. The sentences are most often formatted as SOV, although all 6 combinations are grammatically correct. Adjectives are most commonly placed after the noun, but again there is no strict rule regarding this.

Old Ëkopion is the predecessor of modern Ëkopion. It had two extra vowels - /ɔ/, which merged with /o/, and /ə/, which shifted and fused with /æ/ to avoid confusion with non-phonemic schwa. Post-alveolar clicks apparently used to exist within the language, but they most likely fused with alveolar clicks. The current plural form of nouns ending in -dë is derived from the Old Ëkopion suffixes /ǃ̬e/ and -/ǃ̬ə/. These differ by the ending of the root word - as such, if a name ended in -i or -e, the plural would be -de, but in all other cases, it would be -dë.

The Pikintla dialect is spoken by Arthrowheels living in exposed star light in the equatorial colony of Pikintla, after which the dialect is named. Its main difference from the standard pronunciation is that all front vowels shifted to central.

Humanoid Ëkopion is the variation of Ëkopion used by humanoid species with natural vocal cords that allow them to speak non-glottal pulmonic sounds. As most of them are unable to produce velar or palatal clicks, they instead started pronouncing words based on the romanization, as if it was phonemic.