There is also one trigraph not included in the alphabet: skj /ɧ/

Vowels are often regular length (hence explaining the low amount of words beginning in õ and those containing "u"), but they can be lengthened. Just like in Estonian and Finnish orthography, this is done by writing the vowel twice. For example:

Diphthongs are also quite rare, but do occur at times. Diphthongs with the sound ɪ are usually made with the letter ly rather than i.

Stress in Alamanalya is not in a fixed position. Instead, it has a more melodious flow, similar to Swedish and Italian. The stress is often on every third syllable, or on the penultimate syllable of each word.

The standard dialect and the Eastern dialect vary quite a lot in vocabulary, but the two dialects have similar pronunciations, on in educated and colloquial speech. This article is written with formal IPA and standard vocabulary, unless where stated otherwise. Colloquial pronunciation varies in the following ways, plus several others depending on the area:

There are four classes of nouns: those ending in -is (I, or clanaun), those ending in -a, -e, or -ë (II, or clanadî), those ending in -î or -õ (III, or clanathalyar), and those ending in -o, -ou, or -ly (IV, or clanavist). They can be declined into eight cases: nominative (NOM), accusative/dative (AC/D), genitive (GEN), prepositional (PRE), instrumental (INS), comitative (COM), ablative (ABL), and semblative/translative (SE/T). They are also declined by number, either singular, dual, or plural, when no article or other means of disambiguation are attached. When there is an article, the singular form is always used.

See also: Examples of the Declination of Nouns

Personal pronouns are declined into five cases. They are not marked by gender. The genitive pronoun, as a suffix or a separate word after a noun, also is used for possession.

Verbs have two infinitive endings: -ad, and -õd. There are four tenses: present, past, future, and imperative.

There are only two irregular verbs: lyõd "to be", and nad "to have".

Adjectives are attached to the beginning of the noun they describe and often end with consonants (some speakers, especially those of the Eastern dialect, add in a connecting vowel of their choice, often a or ë). They are invariable by case. (i.e. rööd + siga + er becomes röödsigar, the red pig NOM; rööd + siget + er becomes röödsigeter, the red pig ACC). Adjectives also double as adverbs when the suffix -i is attached (i.e. tahy + i becomes tahyi, quickly). For the rare number of adjectives that end with a vowel, the final vowel changes to i (i.e. bloode + i becomes bloodi, lazily).

Hyul is written as hyulu or hylu (in the Eastern dialect) when the word following it begins with a vowel, such as in the sentence Hylu dolanis î rebetdolanistîta? (Which store is your favorite?).

These use mostly the same wordset as the interrogatives, with the exceptions of hvär and merite. Hvär is changed to pae. Merite becomes meritë, a word also meaning "because". Another exception is the word ku, which is changed to kuu if the sentence has two or more clauses, such as in Kuu Ella ragyam al-qasëlur t-dolanilet, lya kanam tri vaveret. (When Ella was walking home from the store, she saw three squirrels.)

Some example sentences with these contractions:

Ei sabo merita salyam pa-tahyi. - I don't know why she left so quickly.

So ei mäletamaly mini lyo blyuu? - You guys don't remember who I am? (sarcastic tone)

Some example sentences with participle verbs:

The word for affirmation, igen, is not used to confirm a verb. A verb without any form of negation is considered to be affirmed.

Doubt or a lack of definitivy is expressed by the word blyeth. This word can be placed in one of four places: at the end of a sentence, before a verb, after a verb, or as a standalone, one-word sentence. The first three function as an adverb (Blyeth mo al dolanilur; mo blyeth al dolanilur; mo al dolanilur blyeth), while the latter functions as a general interjection.

Negation is expressed with the word ei. It can be used in the same way as blyeth.

A stable preposition and a moving preposition can be combined to make other prepositions, such as inal (into), or denyu (from outside). An example of this is in the sentence Mi thagom denyu foodplõryelet. (I came from outside the restaurant.)

Interjections and Other Emotions Expressed in Written Speech[]

Some interjections that denote a rhetorical question, sarcasm, or surprise, can be added into written speech. This is common mostly among people of the Eastern and standard Northeastern dialects, although it is spreading quite quickly throughout the Southern dialect.

Examples of this speech include the word pa, which is placed before adjectives and adverbs to emphasize them or change them into expressions (i.e. pa-tahyi, so quickly; Pa bonic!, "How pretty!")

Another example is the word blyuu, which has no direct translation, but rather implies a sarcastic tone or makes a question rhetorical.

Unlike in most languages, all statements in Alamanalya are believed to be fact. If the speaker wants to state an opinion, the word îk (an abbreviation of îkbeno, an obsolete word meaning "I believe") is required to be stated either at the very beginning or very end of the sentence (i.e. Îk bużecerer î joo ei, meritë gar husuqpolatastë. "I believe soda is bad because it has a bad aftertaste" is an opinion, but stating it as Bużecerer î joo ei, meritë gar husuqpolatastë. makes it seem as if it is an accepted or proven fact.)

Unlike in the Romance and Germanic languages, where a title is placed as a separate word before the sentence, Alamanalya uses suffixes for titles. Take the common surname "Qurtë" (equivalent to "Smith").

At the Restaurant - A Foodplõryelur[]

Words not included in the picture:

HETEROSEXUALITY AND HOMOSEXUALITY ARE NOT DISTINGUISHED, ALTHOUGH BISEXUALITY IS 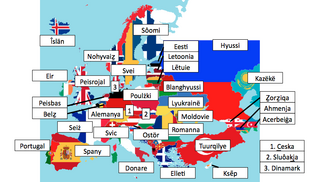 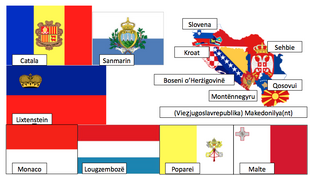 Aaron wrote some notes down in his notebook with the black pen, but they looked like a secret code. - Aaron skryibam noto in notolibrisilaly garżumisigyena, de je xedikõnim-ko eto sekretvalodanka.