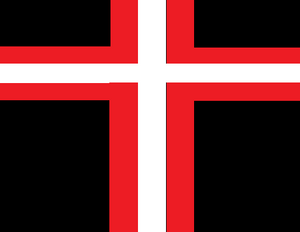 Alpanlandic is a South Germanic language which has been spoken in the Alps for thousands of years, isolated from other languages, remaining archaic and going through strange sound shifts. Its grammar also shifted to include dynamic and stative verbs as well as fluid-S alignment. It remained untouched by other languages until French-speaking missionaries in the 14th century converted the Alpanlanders to Christianity, when they borrowed religious words from Latin and French; they also traded with Basques and Germans, meaning that business words are primarily from Basque and German. Alpies (as they are known colloquially) tend to be herders and pastoralists as well as fur trappers.

The dialects are three dialects. North Alpanlandic is spoken in Germany and Switzerland, which is influenced the most by modern German and Swiss German. West Alpanlandic, which is spoken in Switzerland and France and is the main dialect. Its loanwords come from French, Rumansh and Swiss German; for unknown reasons there are some Caucasian influences (Chechen and Circassian, mainly). Additionally, the grammar is more agglutinative. Central Alpanlandic is the most archaic dialect and its speakers are very isolated; it is here that its relationship with other Germanic languages, including English, Dutch, Icelandic, German and Gothic, is strongest. 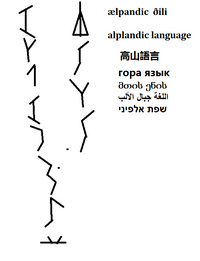 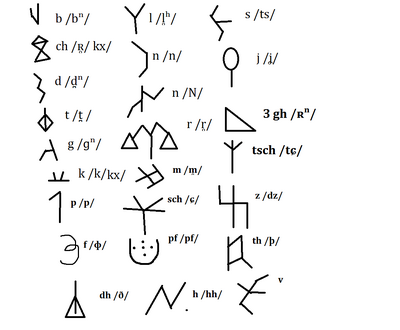 These are the Alpine runes. They are descendent from Old Turkic. 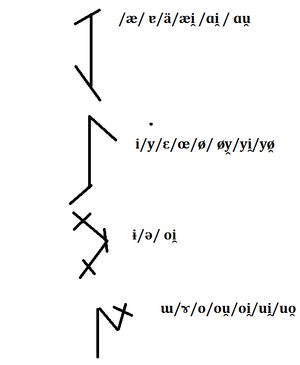 There are 10 noun cases and 4 to 3 genders. There also articles.

Cases must agree with the gender. There are more cases than in most Indo-European languages and the cases are sort of agglutinative.

Articles must agree with gender and number.

The pronouns for animals and inanimates were lost during the 1300s.

There are four genders which work entirely semantically and are unmarked unless it is very specific to mark them, otherwise gender is just shown through agreement.

The verbs are complex and they often incorporate benefactive and instrumental nouns.

The verbs conjugate for tense and aspect. This is a table of how it works, for example the word for walk Ȝanaga.

Adjectives agree with case only. Adjectives come before the noun or after the noun.

The vocabulary primarily comes from Proto-Germanic and French.

Here is a version of the song De La Rey by Afrikaans singer Block van Blerk but for the triumphs of the Alpanlander freedom fighter who fought a guerilla rule against the forces of Italy during World War 2.

Retrieved from "https://conlang.fandom.com/wiki/Alpanlandic?oldid=162732"
Community content is available under CC-BY-SA unless otherwise noted.