Angos is an a posteriori international auxiliary language. It started out as an auxiliary for English, Chinese, and Spanish; it had a balance between each language's complexity and expressive features. Now, the language draws its influence from a number of different languages, including Arabic, Hindi, Japanese, and even Basque. This language was co-developed by users Detectivekenny, Panglossa, and Razlem, with some others.

The digraphs ng and nk may be pronounced [ŋɡ] and [ŋk] respectively.

Angos is a language which is lightly inflected and has a tendency to isolate. A few unique innovations are also present in the language:

Drawing from similar IALs, this language features a classification system where the last vowel indicates the part of speech.

In this language, parts of speech are distinguished as either naturi (natural) or omsanati (artificial, i.e man-made). Natural words take a vowel, and to denote an artificial quality, an "s" can be added.

Angos is a noun-based language, meaning every non-particle has a noun root.

For example, the full inflection of the word ot meaning "fire":

A word of caution: words in this language are meant to be ambiguous as to facilitate conversation. The reasoning behind this system is (noun [action]), where the action is whatever the context allows. The first example ota "to fire", can be taken as "go to a fire" or "to start a fire". The second example verb is "to have a grip of something" or "to get a grip of something", as in to make something in your grip or hold, to have it in your grip or on your person.

The verb "to be" is omitted completely.

All nouns are inherently a neutral gender.

The gender is placed at the beginning of the compound (for more info on compounding, see the Compounding section below):

Example: male runner = na-gi-omo (the gender precedes all other parts of the compound)

This language does not include inflections for plurals normally found in other IALs, nor does it include traditional articles. The particle "le" functions as a plural marker. Demonstrative correlatives are used in place of definite articles.

Angos employs heavy use of particles to determine aspect, tense, mood, etc. The polar particles se and ne can be attached to other particles to emphasize or negate respectively.

Interrogative - ce (must always begin the question): Ce to ala? - Do you eat? (this is only used if there is no interrogative correlative)

The negative necessity modal nemye means explicitly "must not" as in "You must not eat": To nemye ala. To say something like "You do not have to eat", you would place a negative marker in front of the positive modal: To ne semye ala (You 'no' must eat)

Particles go before whatever they modify.

Basic sentence structure (unmodified) is SVO: Wo kelea golo (I throw the ball).

Passive voice is formed with the particle te preceding the verb: Golo te kelea ve wo (The ball is thrown by me).

Place the modifier before whatever it modifies.

In the case above, the negative polar particle ne can only go before ba (it will only negate the succeeding word). Mao is an object and must directly succeed the verb unless it is being modified (e.g: ...ba bali mao)

A prepositional phrase is constructed:

Transitive and intransitive verbs are unmarked.

Transitive: Wo mabada [object] = I change [an object]

Intransitive: Wo laksa = I dance

Angos uses endocentric compounding, in which A+B denotes a special kind of B. In Angos, compounding is generally used for artificial words with no natural counterparts. Stress is placed on the penultimate syllable of each root in the compound.

The noun inventory in Angos is relatively low, only a little more than 500 lexical roots (as of June 2011). But when inflected, there are more than 4000 distinct words. 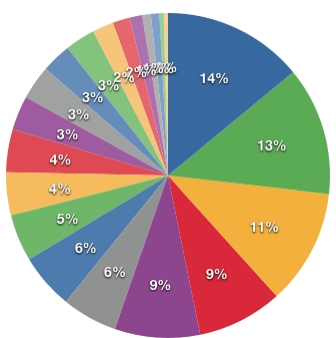 The pie chart above shows the percentage of the language groups whose vocabulary was used in creating Angos.

For a full, up-to-date dictionary, please visit the wikispaces site. # Wikispaces is an ex-site. It's dead.

The pronouns follow the same inflection rules as other nouns. However, when used as adjectives, they become possessive pronouns (my, your, their, our)

*ve is a possessive marker, not a genitive. The only exceptions to its usage are the pronouns, which use the adjective ending to denote possession.

**Ine and dave are strictly spatial particles (e.g. I am in the house - Wo ine reisos). The particle hie is strictly temporal and would be used for phrases like "on Sunday" (hie ayntsios) or "in three hours" (hie tin tyaso).

Using the Table of Correlatives[]

Questions are always in the format: Particle-Subject-Verb-Object

The interrogative correlatives (as well as the particle 'ce') act as clause enhancers; they will always begin the question.

Ce to kafe-oya? - Are you going to the coffee shop?

Relative interrogatives are formed with the addition of the particle "tu":

Article One of the Declaration of Human Rights