Arlesong Note is a song dialect used in the fan world of Ari'Ve. It is a dialect used among Clusternia Note, Alvuren, Neonova and Ve'Cyel by the Hymmniel Clan's Song Magic. 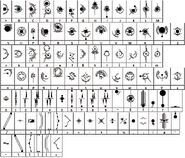 Add a photo to this gallery

E.g. Yhu yira ygy (I feel so much happiness, and this happiness fuels/empowers me)

Arlesong Note is generally written like this: (Subject)(Verb)(Object)(Compound), but it can also be written in plain form, which is used more preferably by many.

Like English, adjectives are placed behind nouns, and the same rule applies for adverbs with verbs.

Let's use 2 of the Arlesong words as an example: 'hysel' and 'hyrdde'. Both verbs have the same meaning of "to sing", but they belong into 2 separate family of words.

If we want to indicate that the former is in the future tense, then we would use 'dir' because 'hysel' is a word that ends with a consonant(al sound). The time tense is attached by replacing the last letter of the word with the suffix. This rule not only applies to consonantal sounds, but also to words with vowel sounds at the end as well.

You've also noticed another part of the table that says Noun to Verb, yes? That part of the table was once used long ago, but after the development of the time tense suffixes (which is shown on the upper part of the table), the Noun -> Verb element was dropped and replaced. However, it is still used, though not as much as time prefixes. They are only used for certain circumstances in a sentence.

Yexelions (translation: 3 Trail Effect) are words that describe/affect the word they are placed behind, and several Yexelions have 3 forms: one is obviously preposition, and the other two are suffix and prefix forms. The reason for the name is because of the 3 forms it can take.

Retrieved from "https://conlang.fandom.com/wiki/Arlesong_Note?oldid=152972"
Community content is available under CC-BY-SA unless otherwise noted.