Edit
watch 01:36
We're Getting Mutants in the MCU - The Loop
Do you like this video?
Play Sound
This project is completed.
By all means, please contribute to the language's culture and/or history.

In the following page, I will show you Atramia with a lot of tables, be aware.

The ethnic flag of Atra, and the flag of The Third Republic of Atra 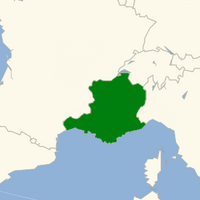 The Third Republic of Atra 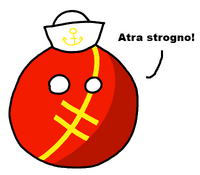 The "Atraball", featuring a sailor hat 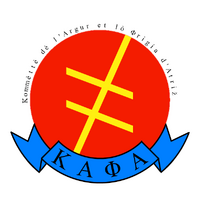 Alphabets of Atramia are made up of Latin scripts and Greek scripts (Φ and Χ).

Please remember not all compounds of letters are pronounced as the way in the table above. Also there are always exceptions.

The vowel /ɤ/ makes appearance when "o" or "ò" is in front of a first stress.

There are four kinds of conjugations for regular verbs.

Ending with voiced consonants, such as condeur (lead) and rer (laugh).

Endling with voiceless consonants, such as tros (dig) and tlolos (hear).

Ending with vowels, such as punga (stab), except for those which end with "o".

Conditional verbs stand for actions depending on other conditions although the conditions can be absent in senteces.

The declaration of conditional verbs is almost same as one of indicative verbs. The word "pra" declarates, too.

A little thing in Atramia is called "Auxiliary Modifier". Auxiliary modifiers are words that can't stand alone and must appear with other words. As for passive voice, we use "red" to modify it.

The modifier here doesn't affect the conjugation of verb behind it.

Declination According to Number and Voice[]

Verbal noun are noun that are formed from verbs and somewhat able to build noun phrase. Verbal nouns, in English, follow verb syntax and can be modified by adverbs. So does in Atramia. The way of building verbal nouns in Atramia is to simply put vu in front of verbs. The verbal noun in the example sentence below is bolded, and the whole noun phrase is underlined.

In the second sentence, we can see the usage of verbal nouns. The verbal noun "v'olseum" takes another noun "lò viòlin" as an object to construct a noun phrase.

The only thing we have to do is to add an article(lò) before the verb. Unlike verbal nouns, deverbal nouns can merely be used as one simple noun. See the sentences below.

Same as English, and similar to the rule of gerund. We add the article lò to make adjectives nouns.

They are sometimes called "Middle Noun" owing to its usage. See the example below:

The pronoun "he" is located between V'Laciur (let) and Metur (go), thus we use gzegc instead of oro. Yet another usage of dative noun is to mark "who the person given things is".

Also to emphasize "the chose one".

The form of comparative/superlative adjectives is pretty easy. There are no irregular adjectives.

In Atramia, attributive verbs can be constructed by van (active) and red (passive). They can be whether verbal or deverbal, according to the context.

In the word "red dein savor", we know that the modified noun "is known" owing to the proposition "dein". And we can replace it with "dos" or "tlos". So is active attributive verb.

Moreover, we can see them in such words as "lacuo red dos gelèr" (a frozen lake) or "omms van è'ssid" (a man killing (people), a killer).

A noun clause acts like a noun in a sentence. Beware that verbal nouns are not noun clauses since they are eventually "nouns". Most of the time the word "van" introduces a noun clause. (All noun clauses below are underlined.)

Because of the dative case, in some cases, the word "van" can be omitted.

Adverbial clauses are common among all the clauses in Atramia. They are often starting with conjunctions like hiol (in case of), seus (if), and so on.

Words as cuei and cuovo can also be used to build relative clauses, just like English.

Like the yes-no question, the syntax is basically the same. But the "esser" is replaced.

Which means "there is/there are" in English or "Il y a" in French.

Auxiliary modifiers are little words in Atramia used to modifier verbs according to mood, voice, etc., yet they don't combine with verbs nor affect the conjugation of verbs. Some of them even have their own inflection. Unlike auxiliary verbs, modifiers are not verbs.

Used for perfect aspect. This modifier has three inflections according to tense. It can't be used alone.

Used for progressive aspect. This modifier has three inflections according to tense. It can't be used alone.

Used for simple aspect. This modifier has only two inflections according to tense (the one of present tense is not necessary). It can't be used alone.

It can be used as either an article or for noun marker for verbs. It has more complex inflections.

Used for conditional mood. It has three inflections according to tense.

Used for passive voice and adjunct clasue. There is no inflection of this modifier.

Used for adjunct clasue. There is no inflection of this modifier.

There are a lot of ways in Atramia to form derivations, including using auxiliary modifiers. Beware some of the derivation are destructive (marked as † below).

Unlike directly attaching the suffix to the word, destructive derivation removes the last consonant (vowels are ignored) and then attach to the destroyed word, such as iutitua from intir. (viculant is somehow irregular.)

Be aware that most of the time, "-ttub" is used for nouns with voiceless ending, while "-zs" is used for voiced consonants or vowels.

Combination of Words in Atramia[]

When two words, one with vowel ending and another one with vowel opening, meet each other, one of the neighboring vowel must be combined. Some linguistists suggest that this might be developed from such rule of prepositions, like dè, lè, lò, etc. The rule was then applied to nouns, verbs, and other words.

The order of combination[]

But of course we can't combine words at our will. There is an order that we must follow.

We use the mark ' to replace the combined part of the word.

As for a language spoken in the place between France and Italy, some of the vocabularies of Atramia do look like those in French or Italian, or even English. Here are at least 600 words now, it's too many to list here. Here's the lexicon page.

Atramia do have a complex system to describe things related to countries.

In most situations the name of one person can be shortened to two parts: first name and last name.

As for the complete name, there are usually four parts besides the first and last name.

The third name "Žaogliss" represents for the location where the family grows. The family "Žaogliss Dastogeun" might came from Žaogliss long time ago, while "Livan Dastogeun" came from Livan.

The star on the sky will lead us to the destination.

Behold! Even in Zhougriss, the light can still be seen.

Neither the heavy snow nor the foreign people can destroy the hard volition of Atramia.

Do you hear that? Listen to your heart.

Is it screaming? Or sobbing? Why are you so frightened?

I will pick up your hand, thus there's no need to fear. I'll take you fly across the dark sky.

The stars will illuminate your direction. The clouds will sew silk for you.

Look! The dawn is coming from the east!

Would there still be light in spite of the absence of sun? (If there is no sun, will there be light?)

This is the era of machine.

Do you have Autism syndrome?.

Let it go from Frozen[]

Here you will see three lines in a group. The upper one is for singing, the middle one is directly translated from English, and the lower one is English line.

The snow glows white on the mountain tonight, not a footprint to be seen.

A kingdom of isolation and it looks like I'm the Queen. The wind is howling like this swirling storm inside.

Couldn't keep it in. Heaven knows I tried.

Can't hold it back anymore.

Turn away and slam the door. I don't care what they're going to say.

It's funny how some distance makes everything seem small.

And the fears that once controlled me can't get to me at all.

It's time to see what I can do to test the limits and break through.

I am one with the wind and sky.

Here I stand, and here I'll stay. Let the storm rage on.

My power flurries through the air into the ground.

My soul is spiraling in frozen fractals all around.

I'm never going back, the past is in the past.

That perfect girl is gone. Here I stand in the light of day.

First Article of The Universal Declaration of Human Rights[]

All human beings are born free and equal in dignity and rights. They are endowed with reason and conscience and should act towards one another in a spirit of brotherhood.

And the whole earth was of one language, and of one speech.

And it came to pass, as they journeyed from the east, that they found a plain in the land of Shinar; and they dwelt there.

And they said one to another, Go to, let us make brick, and burn them thoroughly. And they had brick for stone, and slime had they for morter.

And they said, Go to, let us build us a city and a tower, whose top may reach unto heaven; and let us make us a name, lest we be scattered abroad upon the face of the whole earth.

And the LORD came down to see the city and the tower, which the children and men builded.

And the LORD said, Behold, the people is one, and they have all one language; and this they begin to do: and now nothing will be restrained from them, which they have imagined to do.

Go to, let us go down, and there confound their language, that they may not understand one another's speech.

So the LORD scattered them abroad from thence upon the face of all the earth: and they left off to build the city.