Cheunco language (English pronunciation: [ˈtʃ͡eʊ̯ŋko], Cheunco: chéuncowemansa [cʰǿyŋ̩coweman̩sa]) is the mother tongue of Cheunco people in Cheunca. Due to its abugida writing system, I (probably) won't publish pictures nor font files of Cheunco script. I can say that it's influenced by Gujarati script (headless Devanagari).

I'm pretty busy right now, so I would update this page in a slow pace.

It is known that both Proto-Umpaur and Proto-Hirsactus are descented from Proto-Varnjeston, the most ancient language on the continent. Psieton and Hars once coexisted but the former was more popular; thus Hars was influenced by Psieton. Two daughter languages of Hars, namely Cheunco and Trarhaic, devoloped individually. Middle Cheunco became strong, exporting words to Middle Qentic. In the present, amogn all these descendants, the Trarhaic language obtains the most, and Central Trarhaic is considered canoncial.

The existence of this language tree also suggests that I will start working on Proto-Varnjeston language. 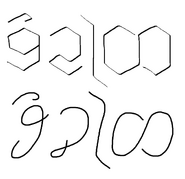 The word "language" in both cursive and blackletter style.

Among native speakers there are three dominant dialects of cheunco language:

The most significant difference between these dialects is the phonology. We'll talk about that in the following sections.

Linguistists tried to reconstruct the phonology of Ancient Cheunco, and found that there were retroflex consonants in the old language. Somehow these sounds were merged with palatal ones, but its influence can still be seen in some words nowadays and languages affected by Cheunco.

Sounds differ between dialects as well. Central has an average consonant system.

While the quality of palatal consonants changed in Northern, making them palatoalveolar, even though the spelling remains the same. The palatal nasal has been merged with velar one, thus "initial ng" is possible (can be heard) in Northern.

Aspirated plosive in Old Cheunco has become affricative in Western, accompanied by corresponding fricative. What were once unaspirated plosives have also become aspirated. The only trill becomes flap.

Hence a word can receive three kinds of pronunciation at most, consider chásama "to yawn":

Though the phoneme /ʕ/ does not exist in Modern Cheunco, pharyngealized /t/ and /s/ (/tˤ/ and /sˤ/ respectively) still remain nowadays.

Cheunco has been undergoing sound changes as well. As a result, the /ʕ/ and /r̥/ and retroflex sounds disappeared.

There are 9 phonemes in Cheunco and a length distinction for each of them.

There are three classes of vowels in Cheunco: rounded, unrounded, and neutral. Only /a/ and /aː/ are considered neutral. The harmony can also be seen in the diphthongs Cheunco have: neutral vowel can precede / follow both rounded and unrounded vowels, but rounded vowels can never appear with unrounded ones.

Vowels that are accented are tend to "keep close", i.e., [e] is always heard when accented and [ɛ] when unaccented. So does diphthong, like [øy] vs [œy], where the former has its accent on the first mora.

In the romanization each phoneme of Cheunco corresponds to the Latin latter with the most approximate sound. There are still some exceptions that one should beware of:

Syllables in Cheunco are simple and can be denoted as (C)V(N) where N is the only nasal onset -n. The letter nga at the beginning of a word refers to the absence of initial.

The most basic unit of timing of Cheunco is mora. Each mora contains a vowel. In the case of long vowels, diphthongs, and the presence of the only onset -n, there are two morae. Syllables in Cheunco can have at most three morae.

Since Cheunco is mora-timing, only one mora in a word can be accented. This mechanism resembles Ancient Greek rather than Japanese. In orthagraphy, most of the time, the accent is not marked, but the romanization adopted acute (á) to indicate the accented vowel. Nevertheless, a mark in the shape of a "3" can be used to indicate the diphthong whose accent is on the second mora since Cheunco people found it "unnatural".

One of both morae in bimoraic syllable can be accented, which causes pitch contour (rising or falling). However, the nasal mora -n can never be accented. Pitch accent is crucial in Cheunco since it can be used to refer to different grammatic roles of a word. For example, both masculine nominative and vocative of eo-stem nouns receive accent on their last mora (-eoón), but accusative on the penult mora (-eóon).

Most textbooks regarding Cheunco language would list 4 patterns of pitch, 2 of which are made by accented suffixes.

Pattern III and IV can only occur when accented suffixes are attached. When two of these patterns refer to the same situation within a word, like ghabía, the locative of ghába "mountain", the pattern III or IV would be adopted. In this case, the word is of pattern IV.

According to the rules, when it comes to compounds, only the accent of one part could survive. Most adverbial affixes would lose their accent. Take jósa "to announce" or example:

Cheunco has a moderate pronoun system. What really makes the pronouns different from normal nouns is that pronouns don't receive gender. One pronoun, no matter whhich type it is, can't be categorized as female or male nouns, not to mention neutral ones.

Although personal pronouns have their own declension, most other pronouns follow the rule others follow as well.

The genitive form of demonstratives can also act as determiners.

Acting as determiners, these pronouns in their genitive form combines with the modified word. Like o in ophóta, meaning "that person".

All interrogative pronouns in Modern Cheunco can be derived from one word sa, referring to "what". It can also combine with other nouns to make more interrogatives, like sophóta "who" and sonáwa, "when", and even sochánmee "which flower".

Nominative are used in circumstances where the noun is the object of the verb or something that equals to the object (connected by copula). Whereas accusative indicates the subject of verbs.

Dative, ablative, and locative are often regarded as indirect arguments of a verb and receive the same ending in dual form. They can only precede some particular postpositions.

Genitive and instrumental have their own wide usages. We'll talk about that later.

Most (inanimate) nouns in Cheunco are neuter, while animate nouns can be either masculine or feminine, hence 3 genders at total. There are also suffixes that can convert nouns to another gender.

Some exceptions exist in personal pronouns, like "we" in Cheunco is hjií instead of hjíhji, which is the form we predicted.

To put it simple, the declension system of Cheunco is composed of 8 suffixes that follow nouns to modify them and mark their case. The form of these suffixes can be affected by the vowel of the nouns (vowel harmony) and the ending consonant of them.

Some suffixes above are accented, which means that the position of the accent of a word could move to the suffix.

Noun compounding is a common phenomenon occurring in Cheunco. Forming compounds, the component proceeding the other one could be either genitive or instrumental.

It's unavoidable that some of noun compounds would violate the vowel harmony, though not demonstrated in the case above. The accent always lies in the word which remains nominative, regardless how long the words preceding the stem are.

A word common in noun compounding is ráya, referring to method or ways how an action is done or the appearing of an object. The silimar function can be seen in Chinese as "...然" or Japanese as "...に". For instance, the phrase 潸然淚下, which means that the tears are falling, contains an adverb 潸然, composited of 潸 (the look or appear of the falling tears) and 然 (an adverbial article). In Cheunco, it would be motaiuráyaiu záinthee jeósa. The adverb motaiuráyaiu consists of two part: motaiu (instrumental of móta "rain") and ráyaiu (instrumental of ráya).

Cheunco features a number of infixes, but prefixes and suffixes also exist. Most verbs contain two syllables, like ógha ("I see"). Infixes can only follow the first syllable of the verb, so that when a verb receives prefix, infix, and suffix, it would be like:

Take the word sxezephaphathía "was hit again and again as I expected" for example, the word consists of several parts but is derived from the verb phátha "to hit".

Where the replicational infix is introduced is not necessary right after the accented mora; it should be at the end of the accented syllable. Take the word éugha "to change" for example:

The infix -n#- denoting negation is introduced after the syllable éu rather than é the mora itself.

An important idea of Cheunco verbs is that a verb can be either "dynamic verb" or "stative verb", similar with Korean and Japanese.

A stative verb describes the stative of an object or a person, like dóntha which means "to be red", whereas a dynamic verb indicates the action done by a person, like oétha "to go".

Nonetheless, some verbs have the two characters at the same time, resulting different usages according to its context. The verb yúca "to think" can be a good example, where it can describe someone's pondering or refer to someone's consideration about something.

What affixes the verbs can receive depends on their character. Some affixes are reserved for stative verbs, and some for dynamic verbs.

There are three voices at total: active, passive, and reflexive. Prefixes for voices always precede other affixes of a verb, and if necessary, can hold the accent of the whole word.

There are only two tenses in Cheunco: past and non-past. The non-past is not marked though, verbs in past tense would receive a prefix z-/ze-/zeo-

Most aspects in Cheunco is realized by infixes. Aspects refer to the state of the verb, like whether it's going on, whether it's over, etc. Some affixes can only be used for dyamic verbs.

Some affixes are reserved for stative verbs as well.

The concept of grammatical mood is quite ambigeous, but together with other auxiliary verbs attaching to them these moods, take the verb oetha (to go) can be expressed:

Basically, a verb has 4 forms, each of which has its own usage. All these forms are derived from the stem.

Several verbs in plain form in the same sentence can become serial, implying that one verb is the result of its previous one, or that the event is described by several verbs. Such structure can be observed in Chinese. Verbs in the sentences are underlined.

In some classical, literature or necessary conditions, sentences will undergo inversion. These methods are used to emphasize one certain of the sentence, including:

This inversion could only occur when the auxiliary is in negation. Such feature resembles the inversion found in Classical Chinese, consider the sentence from an ancient poem, 《大雅·板》.

The original sentence should be hji sxónoda ghaákha (我莫敢葵). Since the auxiliary sxónoda is in negation, here it undergoes inversion and then precede the pronoun hji. In the Classical Chinese, however, only the particle 莫 moved.

Accompanied with vocative nouns and interjection particle he, the topic inversion is common in circumstances where one wants to emphasize the topic object.

In the inversion, nouns in any cases, like nominative, accusative, or even genetive, can be transferred into vocative. Hence, what the case of the vocative noun is must be (can only be) determined from its context.

Under such circumstances, the particles or adverbs presenting negation will move to the front of the sentence with the verb succeeding it. When the inversion occurs, the negative infix -n#- drops.