Dongbuzenytihach is one of the East Kifekutulan languages, a relatively large language family native to Baltus. Other languages of this family include Kifekutuleshi and Razimgopyts, as well as the extinct language of Banlokame. 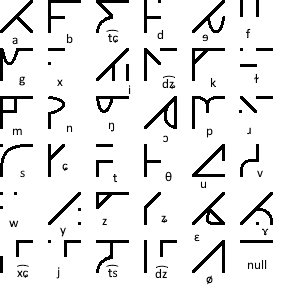 To transcribe loanwords with /ts/ and /dz/, one takes the glyphs for /t͡ɕ/ and /d͡ʑ/ respectively, and adds a vertical stroke in the middle of the glyph.

Thanks to the null glyphs, the phonotactics are slightly more variable than the script could suggest. Some of the most common formations include (CV)CVCV and CV(C)CV. The loanwords in the language can include a /j/.

Verbs conjugate according to mood, tense, person, number and aspect. Each verb can have one of two endings, -oti and -iti. The vowels in the conjugation depend on the infinitive form's suffix and ending. <o> is often substituted by <e>, while <i> is replaced by <y> in the same positions. Verbs have an indicative mood with present, past and future tense, the latter two of which can have a perfective and an imperfective form, an interrogative mood, an imperative mood and a subjunctive mood with present, past and future tense. Verbs can also be negated by adding the prefix ćô- if the verbs starts with a consonant, and ćôd- if the verb starts with a vowel.

Nouns can have three suffixes: -a, -e, and -o. Their plural form is -ä, -ô and -u, respectively.To create a possessive noun, one replaces the final suffix with itself preceeded by -äh-. These can be interpreted as adjectives. Both nouns and pronouns lack cases .