I have mine more or less ready, which others were there in it?

Also I am glad seeing youre still active =)

also which languages was on here? 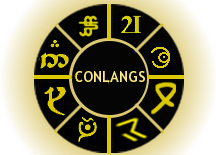 From the 1 o'clock going clockwise:

I wanted to replace the Omniglots with our own characters to better represent this wiki. Razlem 17:24, September 25, 2010 (UTC)

Agreed, I got mines mostly completed just some fine tuning and getting them on the web properly. But we got AQ and Umbrean for sure to use The Emperor Zelos 17:37, September 25, 2010 (UTC)

If none says anything the new layout will be used tomorrow and hence forth with colour additions and such being the only change The Emperor Zelos 14:51, September 27, 2010 (UTC)

a thought I had, what if we offer the front page in vairous languages of our conlangs as they are suffient at some point? The Emperor Zelos 18:25, September 25, 2010 (UTC)

Looking at the front page, idk. Most of it is going to be in English and is rapidly changing, too short, or too abstract. But I can do: Welcome to the Conlang Wiki
A Wiki for development and hosting of constructed languages. A constructed language is a language made for a specific purpose, own enjoyment and more. Constructed Languages are usually linked to constructed cultures and other kinds of inspired settings.

I object to the colour usage on the main/portal page. I thought I could get used to it, but deviating so much from the orange style doesn't please me. I would suggest keeping the orangish-yellow colour, out with the blue! Wattman 10:00, October 4, 2010 (UTC)