1 of 2
Add photo
Kalemic is a language spoken by Kalemic people on Sinai peninsula,

There are 26 letters in Kalemic, each of them has at most 4 different forms according to their position in a word.

After the reform of Kalemic orthography, the number of possible forms of alphabets has decreased. That is to say, there is more space for more alphabets.

Most of their names and pronunciations are the same, but the look is different. 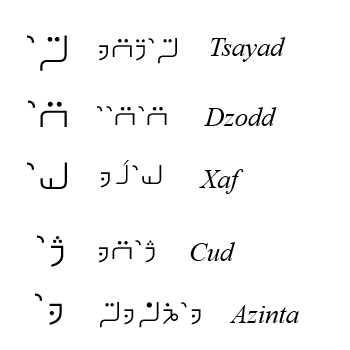 New orthography preserved the feature "reduplication of consonats" by using the indicator "Nubb". That is, once there are two "Nubb"s after a consonant, one should repeat the consonant and add a vowel /ɨ/ between the repeated consonants. This is often used for grammar need.

Verbs in Kalemic, like Arabic, are usually triliteral. Yet there are several forms derivated from the root template:

The most basic form of a verb. There is no difference between form I and its root.

This stem is formed by reduplicating the first consonant of the root. This form usually represents for massive scale of the verb.

This stem is formed by reduplicating the second consonant of the root. This form usually represents for the cause of the verb.

Retrieved from "https://conlang.fandom.com/wiki/Kalemic?oldid=164308"
Community content is available under CC-BY-SA unless otherwise noted.