Kuslafian (natively "kuslafi" is a language that was widely spoken in a very small part of the Nizhegorodskaja oblast' in Russia, however it has since died out and is now only used in written form. It is thought to have been a language isolate influenced by Indo-European languages.

The syllable structure is usually CV(C)(A), where A is any approximant.

The writing system of Kuslafian is a rune-based abjad. It is usually carved in trees and written top to bottom. It is believed that ancient Germanic tribes have had a contact with old Kuslafian speakers, and the latter seeing the rune-writing system decided to create their own runes in a similar fashion. 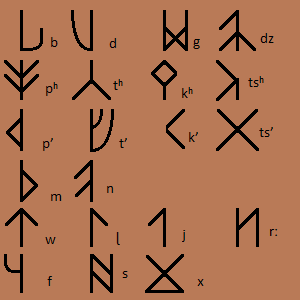 As the writing system is an abjad, is does not have glyphs for vowels, instead it uses inference. The following is a chart which facilitates vowel inference.

Affricates behave like plosives when after a vowel, while act like fricatives when before one. Example: in the word /xat͡sʰi/ HC, ts follows a because t is a plosive and h is a fricative, but ts is followed by i (and not u) because s is a fricative and i ends the word.

Kuslafian is an analytic language. As such, it lacks inflection whatsoever and often uses particles instead of affixes to convey grammatical meaning. They, however, are considered affixes in certain cases, as there is no general rule for spacing.

Pronouns, unlike nouns and adjectives, do not get particles, instead having a different word for each.

The language follows a SVO word order and is nominative-accusative. Adjectives follow the head, as the language is head-initial.