Modern Rekualn (MR; rekualnrel) is the modernized language variant of the historical Kuo-Faslonur language family, spoken as the standard for administration, education, and trade in the Eastern Kuo-Faslonur region of the Uxtratana Landmass in Rahtouri. It is usually spoken amongst the Rekuans of this region, but people of other species are also known to speak it. It has next to no presence on the Hkrinitic Landmass excepting its status as a go-to for code speak (albeit said code speak is usually more of a Pidgin Rekualn) even amongst the governments and militaries of the landmass. MR is also never spoken in West or South Faslon, with West Faslon retaining the tribe-exclusive linguistic developments of the olden days and South Faslon being home to a culture unknown to most denizens of Rahtouri.

MR's makeup, much like the makeup of most languages, has been shaped by Rekuan history. Way back when all Rekuans throughout the Kuo-Faslonur were divided into separate tribes each with their own unique culture and language, many of the larger, more prominent tribes decided to instate an unofficial lingua franca that would be very simplistic in its makeup, and thus the amalgamation of tribe tongues known by linguists as Tribal Rekualn (TR) came to be. However, most tribes were still divided and thus many never enforced the learning of Tribal Rekualn. This division laid the foundation of what would eventually become known as the East-West Schism, in which the more organized Eastern peoples (who generally embraced Tribal Rekualn) would join together to eventually create a more civilized clan network whilst the more tribalistic Western peoples moved west to the thinned out moors and temperate forests and remained mostly tribal.

Not long after the Schism, the ancient synapsid Pehrasiils ventured into Uxtratana (from their homeland of Nærta) and stumbled upon the Rekuan tribes. The Pehrasiils had shown the Rekuans the world outside of the Kuo-Faslonur, and allowed the Rekuans to integrate into their society. This began a chapter of Rekuan history in which the tribalistic lifestyle was generally abandoned in favor of the more civilized urban lifestyle the Pehrasiils enjoyed. One of the results of Rekuan integration into Pehrasiil customs was the nigh inevitable combination of Pehras and Tribal Rekualn. The Pehrasiils, a rather accepting people, were happy to learn the local language in exchange for trading possibilities and removal of the language barrier. It is this creolization that is why many linguists consider MR a part of both the Kuo-Faslonur family and the Krozzin family (as the Pehras language was a latecomer to the latter family).

When the Pehrasiils eventually disappeared, however, the Rekuans of East Faslon were left without much direction. One small family (formerly a tribe) of Rekuans known as the... Rekuans (after which the species would be named) took a step up and began the ill-fated Rekuan Empire. As history tells it, the Rekuan Empire did not last long, and ended on an extremely sour note with their final ruler, Ne'Ut Ikto, being widely hated by just about everyone, but one good thing to come out of the Empire was its discovery (and later, mass enslaving) of the Drulaktor Galrants. The Drulaktors and several Rekuans rebelled against Ikto and won, and the Drulaktor Galrants gained the seat of power in the form of the Drulaktor Hegemony, which would last for eons. With the establishment of the Drulaktor Hegemony came another schism amongst Rekuans (albeit a minor one) between those who chose to remain with the Hegemony in straightforward urban civilization and those who wished to return to their ancestral roots in the jungles of East Faslon. Those who remained with the Hegemony were taught Drulaktior whilst those who slinked back into the jungle brought the TR/Pehras creole with them.

The Rekuans who moved back into Faslon took on a completely separate path in cultural development in history, choosing to go back to a pseudo-tribalistic structure via adopting a clan-based culture instead. As the clans were historically interlinked, many of the same words were spoken between them, and thus after many eons of sharing words, phrases, axioms, and grammatical tendencies, Modern Rekualn was eventually born.

Rekualn has a more guttural phonology compared to Rahtourian languages of other families, perhaps because its main speaking population is made up of reptilians.

Unlike speakers of other Kuo-Faslonur languages (most of which are also syllable-timed), who speak either at a breakneck pace or to a rhythm or a combination of both (in the case of Asah), most Rekualn speakers speak at a medium pace--similar to liturgical Latin.

The following sounds are realized as their matching Latin counterpart:

As for the rest:

Unlike Rahtourior (which has a long/short vowel division) and Galrantior (which greatly focuses on vowel pronunciation), Rekualn is not so strict when it comes to vowels. As the language is highly analytical and relies more on word order and choice than inflection, and also because the language has developed and distilled over a very large region with differing cultures teaching it, vowel pronunciation is very relaxed in Rekualn. Although pronouncing "kiholg" like "kæhuelg" would get you funny looks, any Rekualn speaker will know you meant "kiholg". Vowel consistency is more a guideline rather than a strict rule. Despite this, spelling is consistent throughout all dialects.

One of the notable differences between Latinized Rekualn orthography and Latinized Galrantior or Rahtourior orthography is that /æ/ is not treated as a diphthong for [ɑɪ] as it is for the aforementioned other two languages; instead, it is (generally) pronounced as its IPA equivalent. Instead, /y/ is used to represent [ɑɪ]. Also, most Rekualn dialects have absolutely no usage of [i], with [ɪ] being the only known pronunciation of any instance in which /i/ is employed in the Latinized orthography.

Diphthongs are rare in Rekualn, with only [ɑɪ] being recognized as a common one. Whenever two vowels are clustered together in the same word and the first of the pair is not /u/ (in which case it acts as [w]), most Rekuans will drop a very brief glottal stop [ʔ] in between the vowels to separate pronunciation. In some Latinized transcriptions this glottal stop is represented with an apostrophe /'/, however as the primary Kersa'Kmal* dialect does not acknowledge the presence of a glottal stop in writing, much akin to how the English language does not distinguish the glottal stop from /t/ in dialects wherein it is present, "official" Latinized transcripts of Rekualn also do not distinguish due to the fact that the "official" transcription protocol is based on the Kersa'Kmal standard.

(*)NOTE: The word Kersa'Kmal does not contain a glottal stop despite the apostrophe; the apostrophe represents a sociolinguistic marker that has a grapheme in the faslonretihar unique to this usage.

Rekualn's alphabet, known officially as ij faslonretihar ("the writing of Faslon"), is difficult to classify. Unlike the klimçäje of Galrantior (a strict abugida) or the lüdram of Rahtourior (a semi-strict alphabet), the faslonretihar is an inverse-abugida/alphabet. The reason it is so difficult to classify is because of Rekualn's unique treatment of consonants. Instead of consonant-vowel units, the faslonretihar employs combination glyphs for vowel-consonant units... but only if the consonant in question is "soft".

The faslonretihar distinguishes consonants based on whether or not they are voiced. Of course, this distinction only works in the context of Rekualn:

In other words, when writing in Rekualn, one must remember which consonants are "soft" and use the appropriate fusion glyph. As an example, the word "faslonretihar" would be written as follows (/-/ denotes a new glyph; combination glyphs are bolded): F-A-S-L-ON-R-E-T-I-H-AR 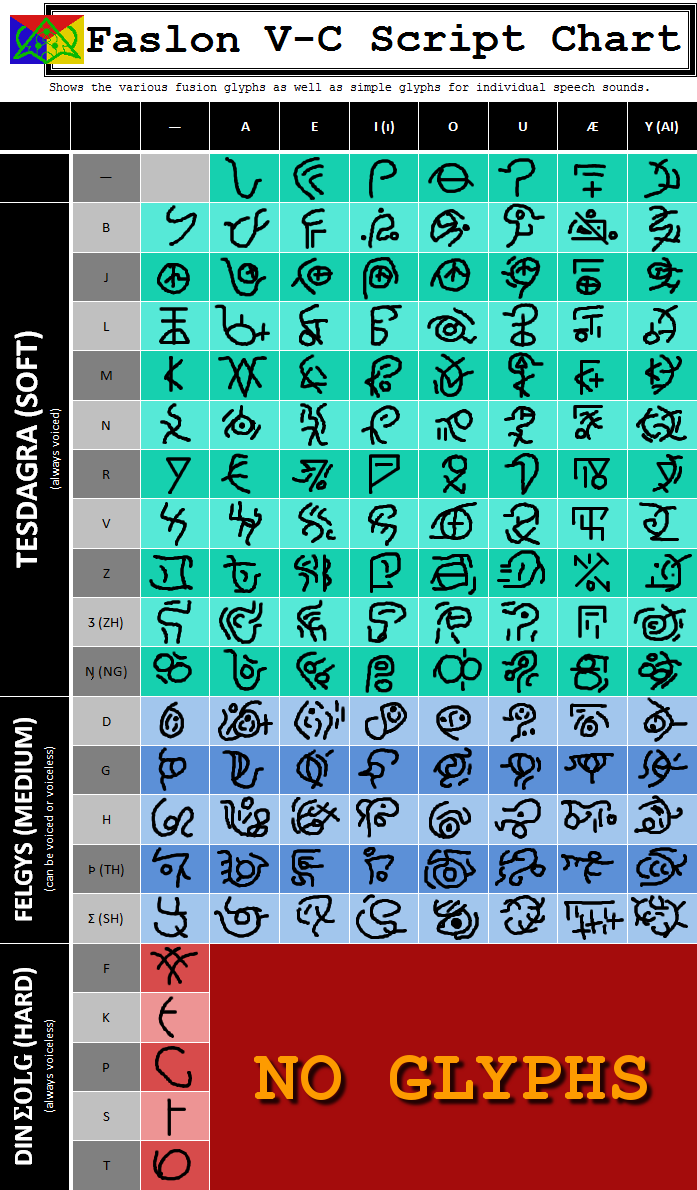 Much like Galrantior, Rekualn plays fast and loose with the typical standards of word order, but not quite in the same way as Galrantior. One part of a sentence may be SVO while another is VOS or OVS; it all depends on what type of words are used and what words are used in general. In this way, Rekualn is analytic much like English, although the following will demonstrate how English word order compares to Rekualn. The "Rekualn" line demonstrates how a Rekuan student who just began studying English would write in English (phrase inconsistencies and all).

ENGLISH: Hello! I am a student from the old jungles, and I'm here to learn English. I do hope this will be a lot of fun!

REKUALN: Of greet! I am student the jungles old from, I will to learn English here and. I hope will adventure this be!

As one can see, the sentence seems to follow SVO to some extent but rearranges the words to a degree that would be confusing to an English speaker. In conversational speech and casual writing, it is traditional to speak in a loose SVO pattern but to put adpositions and adjectives at the end of each clause or phrase. Because of Rekualn's strictly syllable-timed prosody, inflection does not occur.

The best way to describe Rekualn grammar is to imagine it less like a natural human language and more like a programming language--although one could force an S/V/O classification onto Rekualn, it is much more accurate to say that Rekualn clauses are more like strings of information, ordered based on an applied syntactic hierarchy that changes when the exact mood is changed.

Rekualn's nouns do decline, but no "usual" declensions exist aside from "with". Most act as an adjective would, but behave slightly differently. As an example: for pluralization, the proper manner of expression is to add the word "ulem" ("multiple"; transcribed as "olme" for some localized dialects) after the noun but most speakers and casual writers will just add an "em" sound at the end of the noun (written as /'m/ in the Latinized transcriptions) when the addition of such a phoneme complements the one immediately preceding it. In other words, nouns do not (officially) decline for pluralization. Meanwhile, nouns can decline based on relative time/age, the notability of the thing being referred to, etc.

Rekualn is infamous amongst non-native speakers in Rahtouri for many things, but this is one of the more oft-cited aspects of the language when one wishes to express confusion or contempt for it. In a nutshell, Modern Rekualn employs the usage of four different equivalents to "the", despite the fact that the language makes no proper use of gender.

This section is here to display how Rekualn looks on the whole. Glosses will eventually be provided.

The following text here was written to be a sarcastic welcome to visitors on Ultimate Ridley's deviantART page, including pre-installed glosses of (intentionally) poor quality. It also has proper translations into Galrantior and Rahturior.

Of greet at you I at profile possess! Not would you know at message, not care I what not understand you language possess original, but that will do fine! That do any not would language know human.

You will ask, "How message make point?" As... at zero unit. Should I tell you that will you would at Google translator possess, you at zero not understand unit.

Enjoy multiple I did at profile possess walk you!

Hello and welcome to my profile! You probably do not understand this, regardless of your native language, but that's fine! This is not any language a human would know.

You may be asking, "What's the point of this message?" Well... nothing! I should also let you know that putting this into Google Translate will get you nothing.

Thank you for visiting my profile!==