There are two main dialects, the one spoken on the always bright side which eternally is illuminated by their star, and the other spoken in the darkness of the hemisphere facing against the star. As the two sides are constantly at war, the two dialects never became different languages, as a result of common interactions.

Shataranjan has lost much of its oligosynthetic properties. It is now a polysynthetic language, having many new morphemes coming from the expansion of Shataranjan culture.

The standard sound set is a combination of features of both dialects.

Shataranjan's consonant set is dominated by affricates and fricatves, with a few stops and nasals. One of the distnctive features of Shataranjan is that it lacks approximants. Another important detail is the lack of labiodental consonants, as Shataranjans are unable to articulate such sounds.

Vowels come in pairs and have a long and short variant each.

Dialectal differences between sounds include:

The phonotactics are relatively simple. The most complex cluster possible is CCVCC, and a fricative cannot follow its equivalent affricate. Short vowels tend to appear more commontly before affricates. 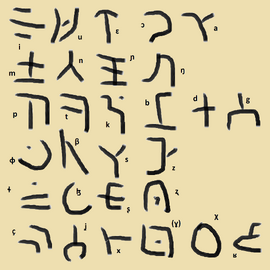 Shataranjan has an alphabetic writing system. The spelling is majorly phonemic, although there are some small irregularities. The main irregularity is the pronunciation on word-final <g>: it can have the value of either /g/ or /ɣ/, depending on etymology. One, however, can check the correct spelling between <g> and <gh> by declining the noun or conjugating the verb - the way the letter is pronounced before a vowel reveals the spelling.

There are two systems of transliteration of Shataranjan into Human languages, one Latin-based and the other Cyrillic-based.

All affricates are created by combining the plosive and the fricative glyphs or digraphs. <t, d> take the place of ʈ an ɖ respectively, while <g> takes place of both ɟ and ɢ.

Affricates act the same as in the Latin transliteration, with the notable exception of gj = гь.

The cyrillic transliteration allows for the use of ю, я and sometimes ё after palatal consonants instead of ь+V, although the use of ё is sometimes discouraged.

Shataranjan is a language with a high degree of inflection and agglutinative-polysynthetic morphology. It is an ergative language, meaning that it does not distinguish between the subject of an intransitive verb and the object of a transitive verb. It has a Verb-Subject-Object syntax.

Verbs are the morphemes that start any sentence, since VSO is the syntactic order. Verbs only have 3 tenses - past, present and future, and additionally conjugate by number and person. It is important to note that the past and future tense suffixes - u(u)n and i(i)v - change vowel length based on plurality - if the number of the verb is singular and the final vowel is short, the suffix will have a long vowel, but in the opposite case, the vowel will shorten.

The verb be - dzelh - will be used as an example for conjugation.

To create the imperfective aspect, one adds -oopf at the end of a verb before the agent.

Nouns are inflected according to case and number. Shataranjan has four cases: Ergative, Absolutive, Dative and Genitive. The plural form of a noun is formed by gemating the final vowel of the root word. There is a total of three declensions for each ending of a noun.

The first declension applies to nouns ending in a consonant, commonly a fricative or a nasal. While the ergative is formed by simply the root word, to form the absolutive one adds -o at the end of the word, with another suffix being added to form the dative form (-ji) and the genitive form (-tse). The plural form is formed by geminating the vowel preceeding the final consonant in the ergative form, instead of the -o.

The second declension applies to nouns ending in -a or -e. As with the first declension, the absolutive form has an -o at its end, however it replaces the -a or -e ending and is the vowel duplicated to form the plural of the word. Dative and genitive work exactly the same as in the first declension.

Pronouns decline in a similar fashion to nouns, with the notable difference of the 2nd person pronoun's dative and genitive form ending in -(e)eji and -(e)etse instead of -(o)oji and -(o)otse.

Shataranjan is an agglutinative-polysynthetic language. Its form of polysynthesis is based on the hierarcy of parts-of-speech - that means, the head and its subordinate morphemes are subjected to being united into one word. As such, one sentence usually only has 2 to 5 words even having a high number of morphemes. Adjectives, adpositions and determiners are incorporated into the subject or the object along with the noun. Adverbs and occasionally pronouns are incorporated into the verb along with the corresponding verb form. Note that pronouns are separated from the verb by a Shataranjan punctuation sign, transcribed with a dash.

The language follows a VSO (Verb-Subject-Object) word order. Because of this and the ergative-absolutive alignment, a sentence always starts with a verb and ends with an absolutive part-of-speech.