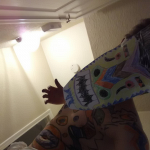 I have been studying some on tribal languages and also systematic naming systems for a while now. From what I have done, I have learned that language is used a lot. I have been making artificial languages for years but it does take a lot of work to make just one language with a sufficient amount of vocabulary. For some, I really needed to understand how culture worked as with both of these working hand in hand. I began developing Wikitor this years as I found a good balance of sounds and vowels that sounded like the real thing; or rather like a stone age language. I did this because I was more interested in how people lived back then and the types of behaviors they had. How did they survive and how did they go about their day? I began keeping journal and learning as much as i could collecting many ideologies and behaviors from the ancient world that would be considered way beyond 4th world livelihood. I found our later that hunter and gatherer society were very complex and used songs and tales to help them map their way across the land they inhabited. But they often adapted and also developed emotions and feeling to things the same way we do today as well. However, their circumstances were far beyond the same to ours in the modern age. Commodities such a food and precious resources were more vital to domestic living back then than it was today. They could not just go to the store and buy cutlery and medicines like we could today. So, traditions do have end of having more to them that meets the eye after all! With all of my efforts, really doubt I would be able to recreate the full experience of a tribal life style living within a urbanized living arrangement. Lets see how it goes!

Retrieved from "https://conlang.fandom.com/wiki/User:TheMammothGod77?oldid=170223"
Community content is available under CC-BY-SA unless otherwise noted.